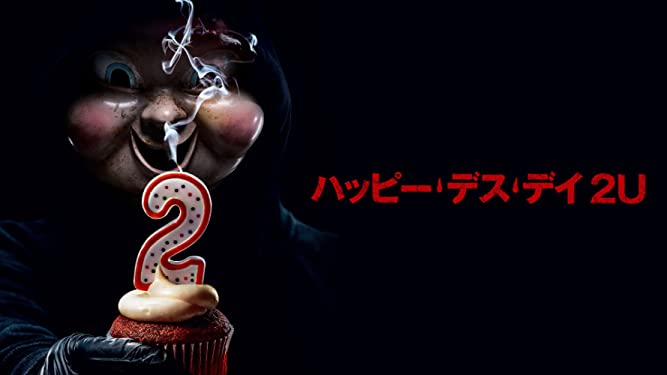 That baby-masked killer is back!

The Battle of the Trees wasn’t over yet!

This film is a horror film released in the US in 2019.
This film, a sequel to the previous film Happy Death Day, was made with the cast and crew intact.

The story starts right after the last one was solved, and the mystery, death, and everything gets significantly out of whack. 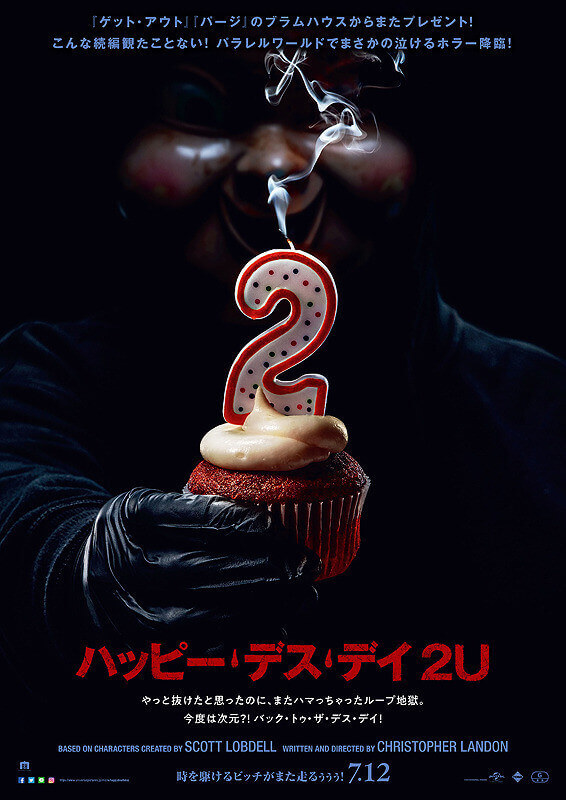 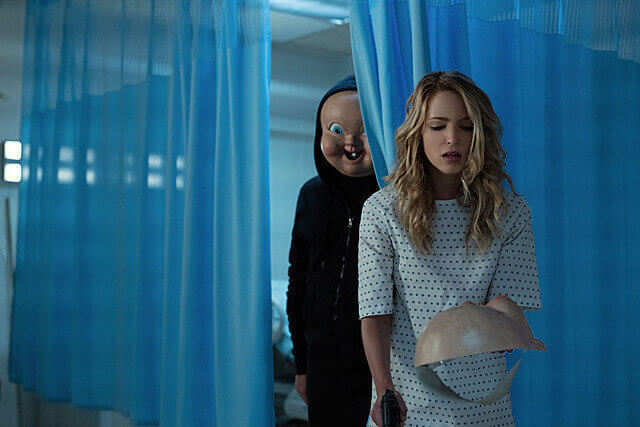 Synopsis of Happy Death Day 2U

On Monday, September 19, Ryan wakes up in his car.

When he returns to his dorm room, freshly awakened and unsure, he finds his roommate Carter and his girlfriend, Tree, flirting.

After being kicked out of his room, Ryan decides to go to his laboratory at the university with his colleagues Samar and Dre to test the results of the Quantum Reaction Device experiment.

However, the dean of the university comes to them and tells them to stop the experiment and confiscate the equipment.

That device had caused the university to go into a power outage frenzy on numerous occasions.

Ryan is lectured by the dean, and his friends flee the scene and become depressed.

Then a strange photo is sent to Ryan’s phone.

Ryan thinks it’s a prank of a nearby one and goes to check out the wing.

Something suddenly tapped Ryan on the shoulder as he entered the unused laboratory.

There his friend Samar was standing there with a churros.

Ryan was surprised when he jumped up, but he was relieved to see his friend.

However, at that moment, a human wearing a baby mask appears and stabs Samar to death.

And Ryan, too, is killed without being able to resist.

When Ryan wakes up, he’s in his car.

Ryan is repeating the morning of September 19, when he was supposed to have been killed, all over again.

Confused, Ryan tells Tree and Carter in his dorm room that he’s feeling déjà vu right now and that he feels like he’s repeating the same day.

Tree, a senior in the time loop, immediately pinpoints the reaction.

Tree and Carter decide to hear more from Ryan.

In the story, Tree speculates that Ryan’s quantum-reaction device may have been the cause of all this.

In order to protect Ryan, they head to watch the basketball game.

However, during the game, an alarm suddenly went off and an announcement was played urging the crowd to evacuate.

Ryan is separated from the Tree in the crowded evacuation, and a human wearing a baby mask appears in front of him.

Desperate to escape, Ryan is caught by a baby mask in a warehouse.

He’s going to kill Ryan! Just then, Tree comes to the rescue.

Tree brilliantly manages to beat the baby mask to a pulp and capture it.

When they peeled off the mask of the baby mask they’d caught, they realized what it really was…!

This is where the worst day of the Tree begins again… 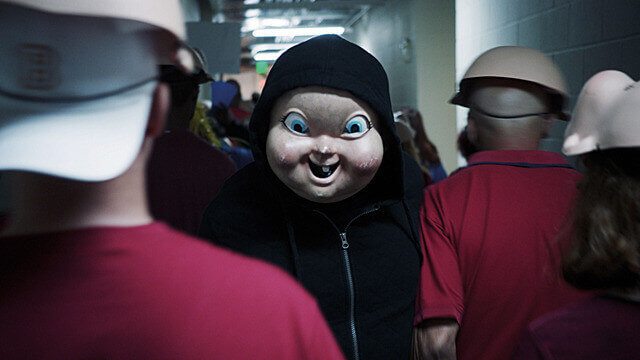 Highlights of Happy Death Day 2U

I hadn’t seen this movie before, but a sequel to a movie that ended so neatly is a cliché, isn’t it?
I was insulted by this.

However, after watching this film, I was painfully aware that I was greatly mistaken in that perception.

This film was the biggest mystery of the previous film: why did the time loop occur? And there is a focus on what to do with it.

And to do something about it, Tree gets screwed over again, but every single one of them is powered up from the last one.

It is exhilarating to see the hijinks and personalities of the Tree explode without a hitch along with it.

And to see Tree’s real break with the past, I was just plain impressed.

To be honest, I didn’t expect to be nagged by such a movie (laughs).

Just think of what it’s like when a determined person goes into horror!

If you haven’t seen the previous film, you should definitely watch it before watching this one.

If you’ve seen the previous film, it’s better to watch this one without delay.

It’s a great fan movie for fans of the previous film.

After watching the previous and current films, you will definitely develop an attachment to all the characters that appear. 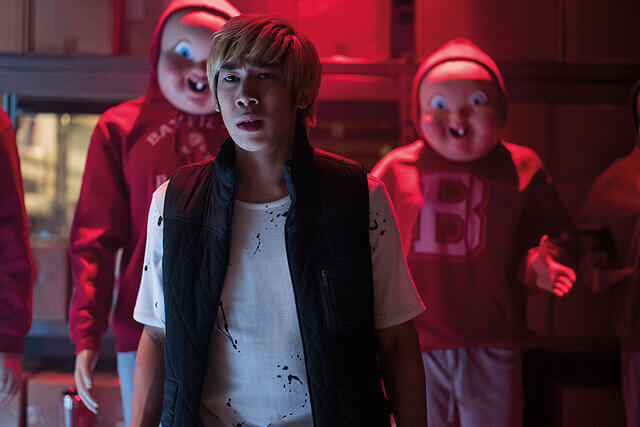 This movie is no longer a horror.

It wasn’t horror, but it was so interesting that it didn’t really matter.

It’s certainly better than the last one in terms of freshness and impact.

However, in terms of personal preference, I ended up liking this one more.

The part where Tree says goodbye to her own mother in a true sense of the word was truly unintentionally moving.

I’ve grown even more attached to the characters through the previous and current films.

Not to mention Tree and Carter, Ryan, who played a very minor role in the last film, has suddenly risen in the popularity ranking.

I hope that Phi Vu, who played Ryan, will continue to work active.

And my favorite character is the guy who Danielle is having an affair with.

It’s only in one scene, but I applaud the brainlessness of it.

Toombs, who was so crazy in the last film, has become a mundane character, and it’s nice to see Tree leveling up as well.

And the kissing scene in the climax of the Tree and Carter’s fluorescent lights flickering was so dramatic that I couldn’t help but admire it.

The start-up sequence of the quantum reactor at the beginning of the film was also very cool because of the effective use of slow motion.

There were a lot of visual effects used in this film, and that was a good thing.

However, I laughed at the scene where the tree throws himself in front of the kissing eyes of Carter and Daniel.

The leveling up of the Tree is also amazing, not only in terms of combat skills, but also in terms of learning all the formulas to use the quantum reaction device correctly.

Ordinary people can’t do that (laughs).

And the part at the end where she figured out the identity of the man in the baby mask is just too much of a deduction!

How long has she known who did it!

This one is great in that it betrays its predecessor in every sense of the word, giving a pleasant ending to a part of the story that was out of reach in the last one.

And the ending was also an expansive conclusion to the story that made me want to watch the next film.

I’d love to see them make the next one with this setting! 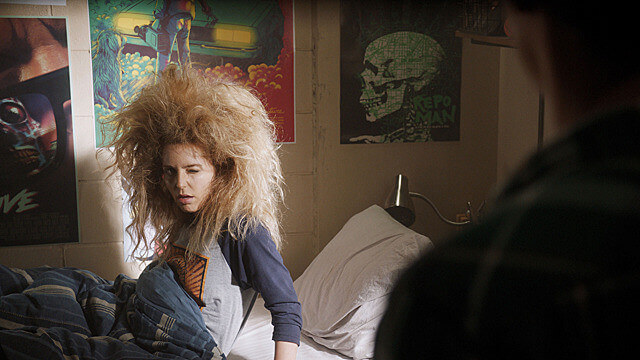 I feel too bad for Daniel (laughs).

She was serious about the charity, and she pretended to be blind to get the key.

After all, she was having an affair….

I feel a little sorry for her to have to go through that because she’s a bitch.

Also, what about the damage accumulated on the Tree’s body, as in the previous film?

I wonder if she recovered once she broke the loop.

Well, it’s a happy ending, so it’s a good thing!

Also, where did the second Ryan who came out early in the show go?

I would have liked to know a little more about why he was transported to a parallel world and ended up in that situation.

Well, it’s a happy ending, so it’s a good thing! 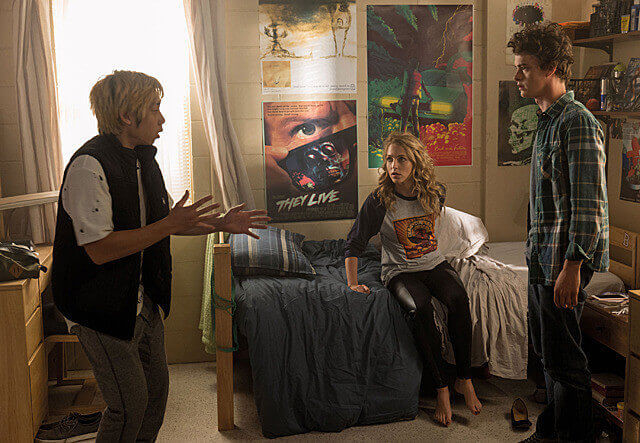 The future is full of endless possibilities.

We hear it a lot, but don’t we rarely feel it?

I am overwhelmed with regret and remorse.

How many options have we given up so far?

If we include things that we are not even aware of, it is an infinite range of possibilities.

We get caught up in the day-to-day, and even when the time of choice comes, it passes in the flow of time.

You are what you are now, the result of being chosen from the infinite possibilities that lie in the past.

But first, let’s congratulate ourselves on living in the now.

If we had made the worst choice, we wouldn’t be in this world right now.

There may not be a number of options that could lead to a happy ending.

Now, what will be the future you choose from the infinite possibilities?

I think we can say that whatever the future may be, it is a good one.

The world is interesting because there are so many different kinds of lives.

Ah, I can’t wait to finish the time machine… 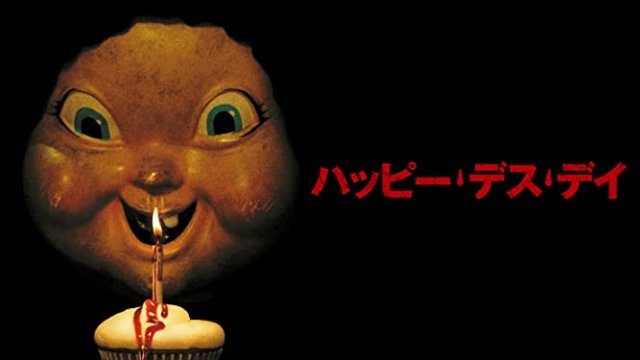 Today is the first day of the rest of my life. “Happy Death Day”

Today is the first day of the rest o...

Nerds save the world. “Pixels”