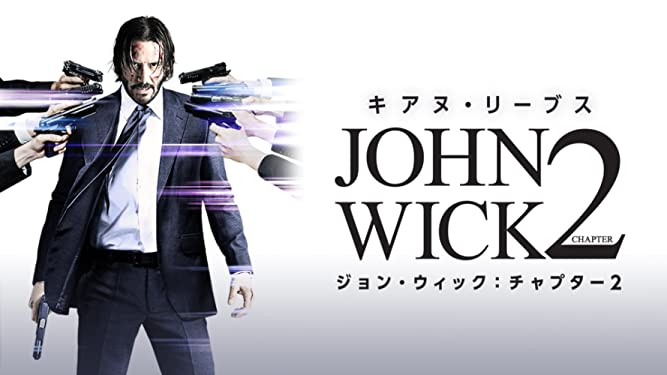 The chain of death is never ending.
Yes, as long as he’s alive…

Released in 2014, the action blockbuster that made a worldwide splash and brought Keanu Reeves back to stardom is back!

Pulling power-ups from the previous film, kung fu, gun kata and car action, the immortal boogeyman takes down the enemy!

‘John Wick: Chapter 2’ is an action movie that was released in the United States in 2017.
The film, which takes place only five days after the previous film “John Wick”, is back with more power, while retaining the main staff. 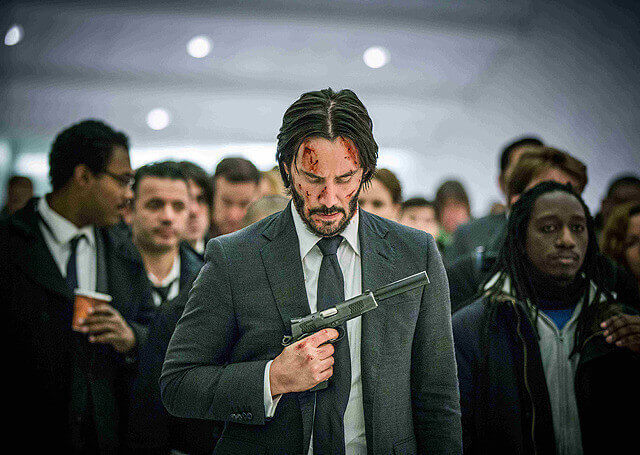 At the end of the last film, there was something about John Wick that he had yet to get back.
It was his favorite car, a Ford Mustang BOSS 429.

When John breaks into the compound of Abram Tarasov, a relative of the previous enemy, he’s on his own.
After a great fight, he returns home with his battered car.

A few days after John decides to retire again, a man comes to visit him.
It was Santino D’Antonio, the head of the Italian criminal organization Camorra.

Santino and John had an intimate relationship.
There was a secret blood covenant between him and John called the “Oath Seal”.

Using as a shield the fact that he once helped John to get out of the organization and exchanged an “oath” with him, Santino tries to get John to do the job.
However, John is adamant about it.

Santino simply withdraws from the scene, but on his way back, he blows up John’s house and leaves.

When the house filled with memories of his beloved wife is blown up, an enraged John tries to ask Continental owner Winston about his whereabouts.

However, Winston admonishes him that the “oath” is so heavy, and advises him that he should fulfill his “oath” with him first.

Reluctantly, John visits Santino and decides to accept his request.
Santino’s request is the elimination of his real sister, Gianna…

Thus, John Wick’s lonely battle was about to begin again.

Will there ever come a day when he can really retire…? 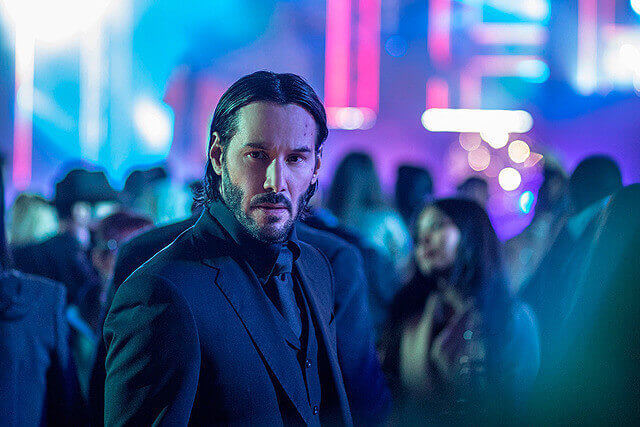 Everything is scaled up compared to the last movie, and John’s fight is the coolest thing ever!

Keanu’s gutsy action will leave your mouth watering as he kills anyone who comes at him.

The enormity of the underworld and the rules of the Iron Law and so on are revealed, and it’s fun to see the world of the film expand more and more.

The one I’d most recommend is the scene where John Wick gets his gear in order!
Whether it’s an RPG or not, I love to see the main characters building up their strong equipment.

I wonder why that kind of thing is so exciting?
It tickles the heart of a boy.

I hope you’ll pay attention to that too!

And if I had to tell you, I’d say he’s with Lawrence Fishburne!
Who hasn’t grinned at the two of them together since The Matrix!

Be sure to keep an eye out for Lawrence Fishburne’s role!

The battle with the enemy assassin Cassian, played by Komon, was very cool.
I love the part where they walk up and down the aisle and hit each other with silencers!

Make yourself popular with those around you! But that exchange of life was cool, wasn’t it?
Cassian was stopped and stabbed, but I wish he could have appeared in the next movie.

I also like the part where Cassian and I say to each other in the bar that I’m going to kill him without suffering.

After the $7 million bounty is placed on them, the assassins attack them one after another.
John is so strong that he knocks it down with a bang!

The impact of the huge assassin is too great.
He tormented John like the heart of the Fist of the North Star, but he was eaten by a lead ball and ascended to the heavens, didn’t he?

My secret favorite part of this movie series is that John is always so ragged.
He is always wounded all the time, but when the enemy approaches, he controls the place with his quick movements.
I like it because I feel like it adds weight to the action and the story.

The ED is also good with the Shura no Michi ending where John’s battle will continue from now on.
We’ll have to let John go to the land of the dead to continue to entertain us (laughs). 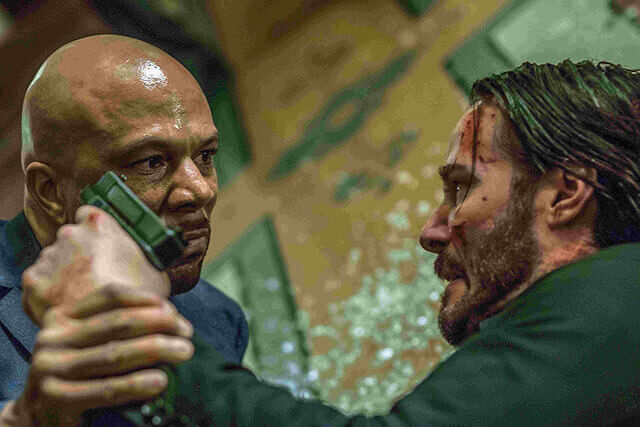 You didn’t have to put a bullet in Santino’s sister, Gianna, did you?

If the bullets hadn’t been fired, wouldn’t it have been treated as a suicide and there’s a chance they wouldn’t have been targeted?
But in the end, Santino tries to kill John when he knows the truth, so it may be the same thing.

Also, what about the police forces in this world that are killing people in the streets?
I guess he’s a resident of the underworld, so he doesn’t really want to be involved in it even after he dies.

It is sad that the owner of the Continental Hotel has broken with him.
John was the only person I could count on….
This is where John’s really lonely battle begins. 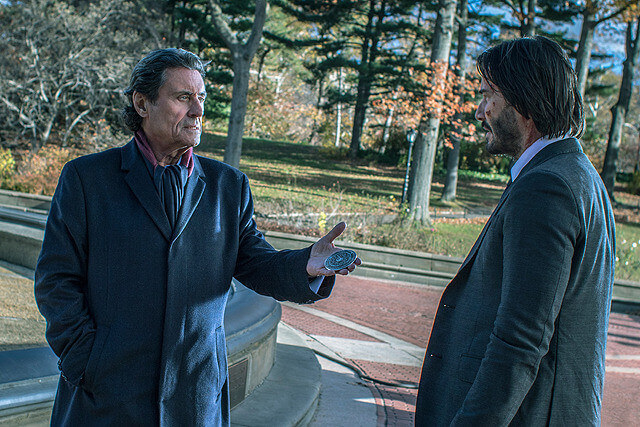 “Fate favors the brave.”
These are the words of the tattoo on John’s back in the play, apparently from the Republican Roman playwright Publius Terentius Afer.

There is a favorite saying of Yoshiharui Habu 9-dan, a shogi player I respect, “Fate smiles at the brave”.

It’s unclear if the two sources are the same, but I guess there’s always a huge fear that strikes those who do things.

But it is to those who stand up to it and are inspired that the Goddess of Destiny smiles.

There comes a time in everyone’s life when they lose their footing.
That’s when it’s time to be brave and take a step forward.

You might be able to fly higher than you think. 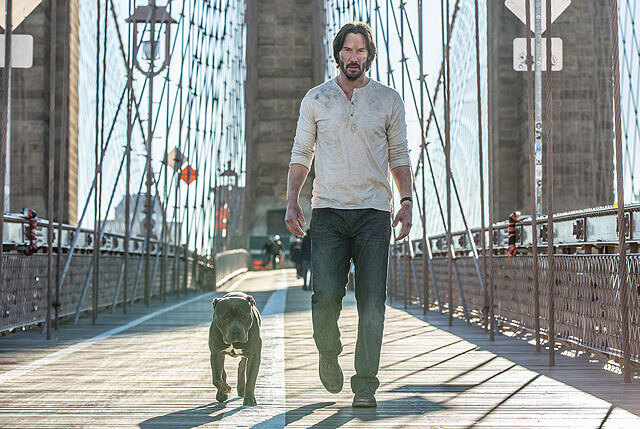 Even if it’s the way of Shura. 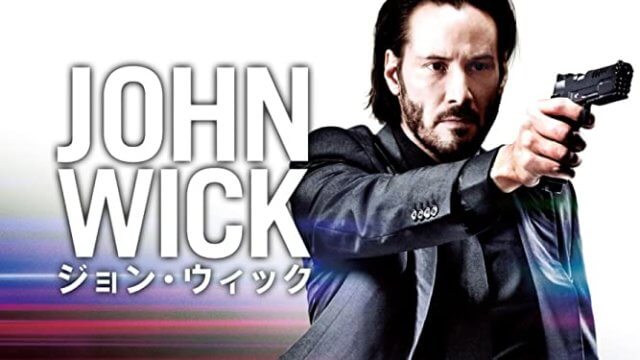 Today is the first day of the rest o...